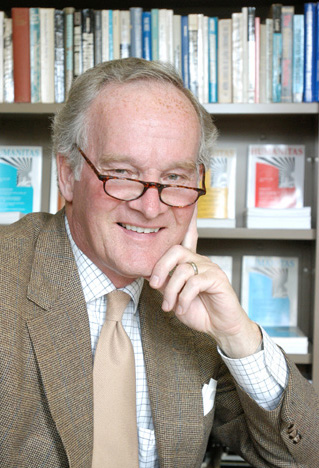 Claes G. Ryn
Ryn’s areas of research and teaching include ethics and politics, politics and the imagination, historicism and the theory of knowledge, the history of Western political thought, American political thought and constitutionalism. The recipient of many grants and awards, Professor Ryn was named Outstanding Graduate Professor by the CUA Graduate Student Association. He has taught also at the University of Virginia and Georgetown University. Ryn’s many books include, A Common Human Ground, America the Virtuous, Will, Imagination and Reason, and Democracy and the Ethical Life. Ryn is widely published on both sides of the Atlantic and in China. In 2000 he gave the Distinguished Foreign Scholar Lectures at Beijing University. The same university published (in Chinese translation) the book based on the series. Ryn is editor of Humanitas and chairman of the National Humanities Institute (NHI). He served as president of the Philadelphia Society. He was chairman of the Department.

Where in the World Are We Going?

The Ideology of American Empire

Which American? by Claes G. Ryn

American Conservative articles:
A Jacobin in Chief
What is Left? What is Right?

Books:
A common human ground: universality and particularity in a ...
America the Virtuous
Posted by papabear at 10:54 PM No comments: Links to this post

From an email I received:

He also sent me an excerpt from a book chapter he wrote (Behe,M.J. 2004. Irreducible Complexity: Obstacle to Darwinian Evolution. In Debating Design: from Darwin to DNA. (eds. WA Dembski and M Ruse), pp 352-370. Cambridge University Press: Cambridge). It is a response to arguments by Ken Miller regarding the bacterial flagellum.

Finally, rather than showing how their theory could handle the obstacle, some Darwinists are hoping to get around irreducible complexity by verbal tap dancing. At a debate between proponents and opponents of intelligent design sponsored by the American Museum of Natural History in April 2002, Kenneth Miller actually claimed (the transcript is available at the website of the National Center for Science Education) that a mousetrap isn’t irreducibly complex because subsets of a mousetrap, and even each individual part, could still “function” on their own. The holding bar of a mousetrap, Miller observed, could be used as a toothpick, so it still had a “function” outside the mousetrap. Any of the parts of the trap could be used as a paperweight, he continued, so they all had “functions.” And since any object that has mass can be a paperweight, then any part of anything has a function of its own. Presto, there is no such thing as irreducible complexity! Thus the acute problem for gradualism that any child can see in systems like the mousetrap is smoothly explained away.Of course the facile explanation rests on a transparent fallacy, a brazen equivocation. Miller uses the word “function” in two different senses. Recall that the definition of irreducible complexity notes that removal of a part “causes the system to effectively cease functioning.” Without saying so, in his exposition Miller shifts the focus from the separate function of the intact system itself to the question of whether we can find a different use (or “function”) for some of the parts. However, if one removes a part from the mousetrap I pictured, it can no longer catch mice. The system has indeed effectively ceased functioning, so the system is irreducibly complex, just as I had written. What’s more, the functions that Miller glibly assigns to the parts—paperweight, toothpick, key chain, etc.—have little or nothing to do with the function of the system of catching mice (unlike the mousetrap series proposed by John McDonald, discussed below), so they give us no clue as to how the system’s function could arise gradually. Miller explained precisely nothing.With the problem of the mousetrap behind him, Miller moved on to the bacterial flagellum—and again resorted to the same fallacy. If nothing else, one has to admire the breathtaking audacity of verbally trying to turn another severe problem for Darwinism into an advantage. In recent years it has been shown that the bacterial flagellum is an even more sophisticated system than had been thought. Not only does it act as a rotary propulsion device, it also contains within itself an elegant mechanism to transport the proteins that make up the outer portion of the machine, from the inside of the cell to the outside. (Aizawa 1996) Without blinking, Miller asserted that the flagellum is not irreducibly complex because some proteins of the flagellum could be missing and the remainder could still transport proteins, perhaps independently. (Proteins similar—but not identical—to some found in the flagellum occur in the type III secretory system of some bacteria. See Hueck 1998). Again he was equivocating, switching the focus from the function of the system to act as a rotary propulsion machine to the ability of a subset of the system to transport proteins across a membrane. However, taking away the parts of the flagellum certainly destroys the ability of the system to act as a rotary propulsion machine, as I have argued. Thus, contra Miller, the flagellum is indeed irreducibly complex. What’s more, the function of transporting proteins has as little directly to do with the function of rotary propulsion as a toothpick has to do with a mousetrap. So discovering the supportive function of transporting proteins tells us precisely nothing about how Darwinian processes might have put together a rotary propulsion machine.

Posted by papabear at 8:22 PM No comments: Links to this post

check at BC
Posted by papabear at 4:27 PM No comments: Links to this post

St. Thomas shows in the Summa (12) that contemplation is an act of the intellect superior to reasoning, a simple view of the truth; (13) and, when it is a question not of philosophical contemplation, but of that contemplation which the saints speak of, it springs from love, not only from the love of the knowledge habitual to philosophers, but from the love of God, from charity. (14) It proceeds consequently from living faith enlightened by the gifts of the Holy Ghost, especially by those of understanding and wisdom, which render faith penetrating and sweet.(15) Supernatural contemplation thus conceived supposes the special inspiration of the Holy Ghost, which His gifts dispose us to receive with promptness and docility,(16) as the wide-spread sails on a boat receive the impulsion of a favorable wind; then the boat advances more easily than by the labor of the rowers, a symbol of discursive meditation united to the practice of the virtues. From this point of view, contemplation, because of the special inspiration which it supposes, deserves to be called, not acquired but infused, although at the beginning it may quite frequently be prepared for by reading, affective meditation, and the prayer of petition.(17) The soul thus actively prepares itself to receive the special inspiration of the Holy Ghost, which will at times be strong enough so that discursive meditation will no longer be necessary, as when a favorable wind is strong enough to make the boat advance, the work of the rowers may cease.

This special inspiration of the Holy Ghost given to make us taste the mysteries of faith, uses the connaturality or sympathy with divine things that is rooted in charity.(18) This special inspiration gives rise in us to an act of infused love and of living, penetrating, and sweet faith, which shows us how revealed mysteries, although still obscure, wonderfully correspond to our deepest and loftiest aspirations. These acts of love and of penetrating and sweet faith are said to be infused, not only because they proceed from infused virtues, in this case from the theological virtues, but because they suppose a special inspiration of the Holy Ghost, and because we cannot move ourselves to them with the help of common actual grace. In this case God moves us, not by inclining us to deliberate, but to acts above all discursive deliberation.(19) For example, on reading the Gospel of the day at Mass, some expression that we have read many times is illuminated and captivates us, such as the words of Jesus to the Samaritan woman: "If thou didst know the gift of God!" (20) In like manner a preacher vividly experiences this illumination we are speaking of when at first he feels deeply his powerlessness to preach the Passion in a fitting manner on Good Friday, and then receives the animating breath which vivifies his thought, his will and his feelings, that he may do good to souls.

At times contemplation rises toward God by a straight movement from a sensible fact, for example, from a parable such as that of the prodigal son, to the wonderful vision of the divine mercy.(21) At other times contemplation rises by an oblique movement, for example, from the mysteries of salvation, from those of the childhood of our Savior and of His passion, to the living and profound thought of eternal life.

Lastly, there is occasionally contemplation, called circular, of the infinite goodness of God which radiates on all things, on all the mysteries of salvation. This prayer is a very simple, most loving gaze, which reminds one of the circular flight of the eagle high up in the air, hovering as it gazes at the sun and its radiation over the horizon.(22)

These principles thus formulated by St. Thomas illumine the traditional teaching on contemplative prayer which we found expressed in the works of St. Francis de Sales. This same teaching appears also in a concrete and experiential form in the writings of St. Teresa.

Compare with Fr. Giertych.
Posted by papabear at 2:05 PM No comments: Links to this post

For the sake of CYA, in case I use this material elsewhere in the future:

This website and its content, unless otherwise stated or provided with an acknowledgment of its source, is copyright by T. Chan. All rights reserved.
This blog is intended to help those who are in pursuit of truth and knowledge as I delve into philosophical and theological inquiries, and to solicit reactions, comments, criticisms, and clarifications. Nonetheless, I would ask that you if you seek to use the material presented here in a published form other than the Internet, please contact me either by leaving a comment on the relevant post or by sending an e-mail. Thank you!