CWR Dispatch: Ratzinger’s Western Culture delves deeply into the foundations of European life
This collection offers reflections on many of the fundamental underpinnings of the life of society, applicable to both European and non-European countries. 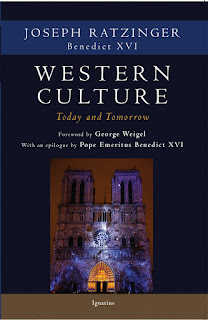 Edit. 5/12
A review: What Will Become of Europe? by Carson Halloway
Posted by papabear at 10:58 PM No comments:

As I wrote in The Irony of Modern Catholic History, a fissure in the ranks of the reformist theologians at Vatican II began to open up during the Council’s third session, held in the fall of 1964. A new theological journal, Concilium, was being planned by some of the Council’s influential theological advisers (many of whom had been heavily censored in the pre-Vatican II years). A towering figure among them, the French Jesuit Henri de Lubac, began to worry that Concilium would take the reformist project in a deconstructive direction: one that would do serious damage to what John XXIII, in his opening address to the Council, called “the sacred deposit of Christian doctrine,” which Pope John urged “be more effectively defended and presented.”

The first several issues of the new journal intensified de Lubac’s concerns. So in May 1965 the most venerable member of its editorial committee quietly withdrew from the Concilium project while continuing his work at the Council itself. As Vatican II drew to a close, others would join him in expressing serious reservations about the tack being taken by their onetime theological allies. And those concerns did not lessen over time.

The result was what I call in my book “The War of the Conciliar Succession”: the war to define what Vatican II was and what Vatican II intended for the Catholic future. This war was not a struggle between “traditionalists” and “progressives.” It was a bitterly fought contest within the camp of Vatican II theological reformers. It continues to this day. And the question that so concerned Henri de Lubac remains entirely pertinent, 56 years later: Would an interpretation of the Council that effectively set the Catholic Church against “the sacred deposit of Christian doctrine” end up betraying the gospel and emptying it of its power?

Joseph Ratzinger joined de Lubac and other dissident conciliar reformers in launching another theological journal, Communio, which he and his colleagues hoped would advance an interpretation of Vatican II that was in continuity with the Church’s settled doctrine even as it developed the Church’s understanding of that doctrine. Communio, now published in 14 language editions, has been a creative force in Catholic intellectual life for decades. Like Ratzinger, Communio is not against Vatican II; it has challenged what its authors contend is a wrongheaded interpretation of Vatican II.

Only one group was engaged in true reform, though in a wrong-headed way by employing the council to do it. Would  it be accurate to say the progressives were leaning towards heresy or had embraced it? Or were they guilty of an archaeologistic thinking that reflected a historical reality that existed only in their imagination? (Simplicity, the Eucharist as Last Supper, and all that?)

Evidence of Bugnini Being a Freemason?

The Apocalypse of John: An Essay in Dogmatic Interpretation by Sergius Bulgakov

Posted by papabear at 1:59 AM No comments: